I can't believe she's 11 already. We're having her party on May 7th because she wanted one at the Park by our house and the only weekend they had an opening for a Ramada was on the 7th. She said she doesn't mind waiting at all. My son Thomas is going to do the face painting and Sam's is quite thrilled about that. Thomas even made some designs so that it almost would look like a tattoo. Sam is super stoked about it. We've got all the decorations, the gift, (Fancy Ancy roller skates) and all the food will wait until the week of the 7th. Her mom hasn't called or anything. *sigh* I can't imagine, but that's me. And it's not for me to judge. She told me tonight that she's so happy with us. I asked her why that came to mind and she said that she was just safe and secure with us. She knows we'll always have her back, just like we did her brother. I hugged her so hard. She's such a good girl most of the time. She has her moments where I think to myself, I wanted to become a mom again at 64? But most of the time it's nights like tonight. I can't wait for her to see her new roller skates. She loves skating. Now she'll be able to not have to rent skates at the roller rink. She hates putting her feet in other people's shoes. There are certain things that cause her to be a little OCD. :) She doesn't want a cake today, instead she wants Green Chile Stew with Tortilla's. :) She's saving herself for the cake on the 7th. In 2 1/2 months it'll be a year that she's been ours. Where does the time go? I swear it goes by faster every year.

I hope everyone has a glorious week. Mondays can sometimes be overwhelming, but just remember only four more until Friday. I will leave you with a darling picture of Sam and Vincent when she was four. I can't believe she's 11. *sigh* 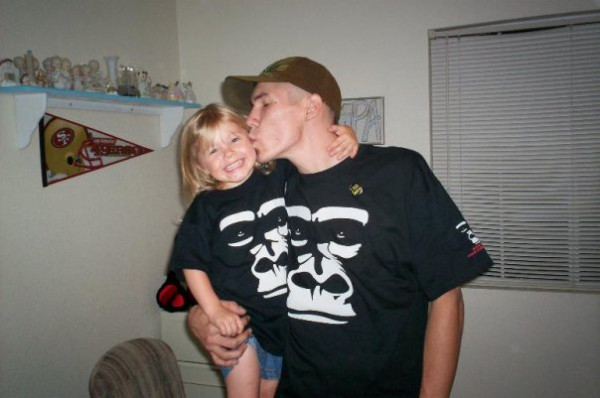